Radio Sai is pleased to bring you some glimpses of the Choir by the Devotees from Russia and Adjoining Countries held in Prasanthi Nilayam on 14th July 2014.

For those who have missed this musical program could log onto www.radiosai.organd watch the recorded webcast of this evening. 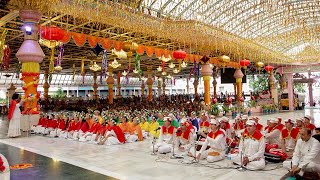 July, 2014 Sanathana Sarathi, paperback and e-versions, in English and Telugu, available on www.sanathanasarathi.org.

What is the easiest way to realize the God within? Bhagawan lovingly explains to us today.

Let God be your Guru, your path, your Lord. Adore Him, obey His commands, offer Him your grateful homage, and hold Him fast in your memory. This is the one and only way, and the easiest way to realize Him as your own reality. This reality is cognisable everywhere. It is evident within yourself, when ...you earnestly seek it. You can experience it, even while performing selflessly your duty to yourself and others. I shall indicate to you today, four directives for sanctifying your lives and purifying your mind, so that you can contact the God within you. They are: Give up the company of the wicked (Thyaja durjana samsargam); Welcome the chance to be among the good (Bhaja Sadhu Samagamam); Do good deeds both day and night (Kuru punyam ahoraatram); Remember and discriminate which is lasting or otherwise (Smara nitya-anityatam).

Service to people, even if done as part of one's duty becomes elevated into Divine Worship. -BABA.

Get 'Thought for the day' in your email every day. Subscribe to our newsletter http://krishna.radiosai.org/subscribe/?p=subscribe (Also called Sai Inspires from Prasanthi Nilayam, a free daily Inspirational Email service from Radio Sai)

"To be grateful is to recgonise everything that Swami has given to us... Swami, You gave us everything" were the words of gratitude by the passin...g out batch of students from College Of Nursing and Allied Health Sciences, SSSIHMS, Whitefield, Bangalore this morning here at Prasanthi Nilayam.

Offering 'Jai Ganesh' with the famous song, "Eka Dantaaya..." the programme continued with the grateful students bursting into offering rich gratitude to Mother Easwaramma for her 'Bundle Of Joy' given to the mankind, the song was "Janam diya Tuune Sai Ko Hum Pe Kiya Upakaar...".

The programme continued for the next one hour with a variety of songs in Telugu, Tamil, Kannada, Malayalam, Hindi and English... with interludes of commentary, singing paeans to Lord's various forms. The programme ended with a song of prayer seeking blessings, "Aaseervadinchu Maa Swami...Maa Thalli..." from Beloved Mother Sai.