(Please visit us again for more pictures/videos/reports ..... to be uploaded here on this page .....

Aishwarya Rai Bachchan at 'A Tribute to the Legend Sri Sathya 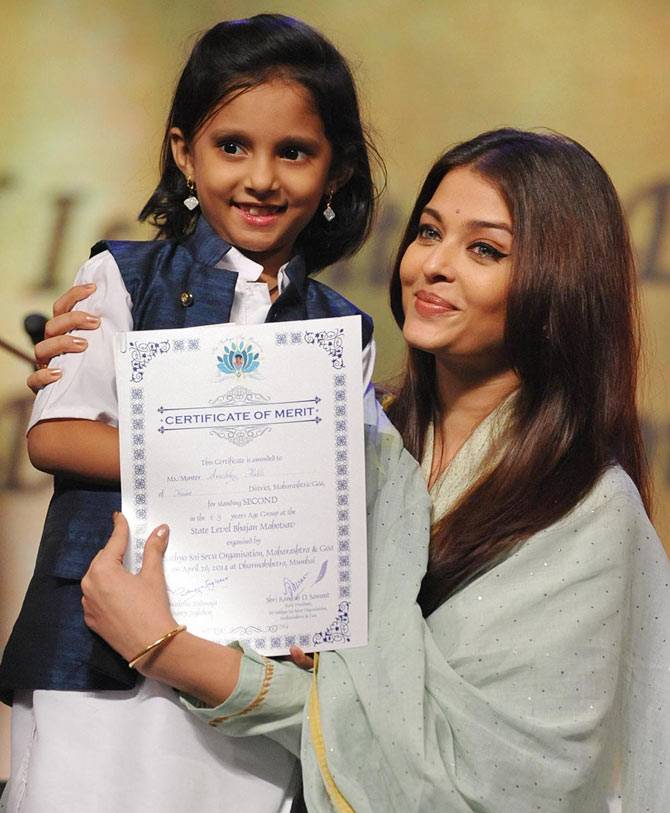 An ex-student of the Sathya Sai Bal Vikas programme, Aishwarya also felicitated some of the students for their outstanding achievements. 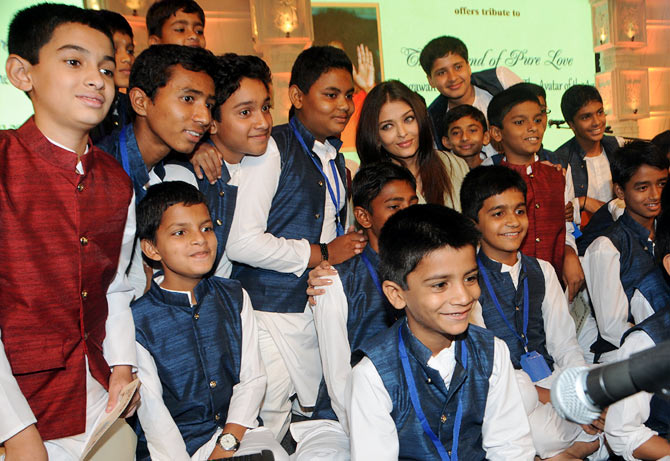 Aishwarya tried her hand at singing as well, and sang bhajans with the students. 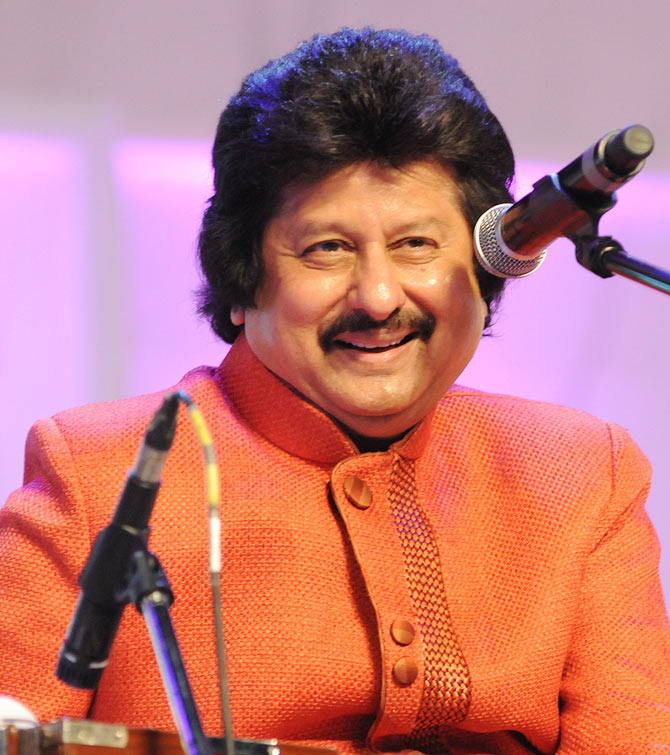 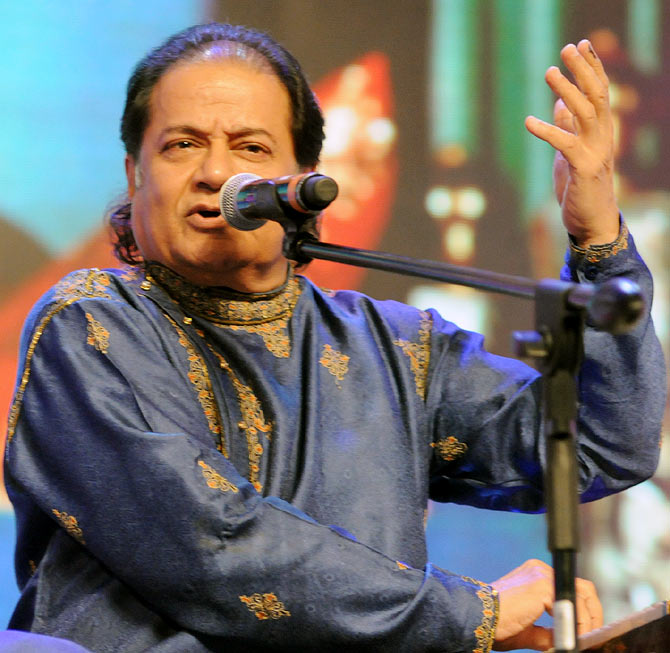 Kavita Krishnamurthi, Richa Sharma and Sumeet Tappoo were among the other performers. 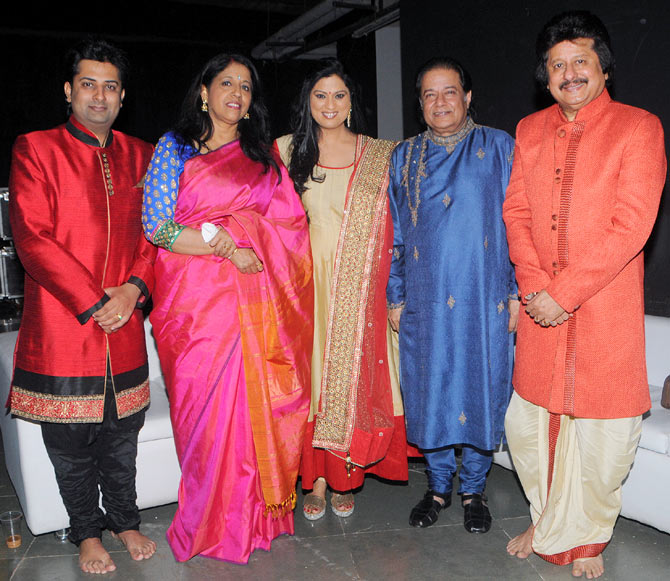 Bollywood star Aishwarya Rai Bachchan paid her tribute to the late godman Shri Sathya Sai Baba, at the 3rd anniversary celebrations of his Mahasamadhi, held at the NSCI stadium in South Mumbai.

Dressed in a light greenish salwar kameez draped in a shawl, Aishwarya felicitated a few students and also sang a few Sathya Sai Baba bhajans along with them.

A few other famous personalities were also present. Check out the photos. 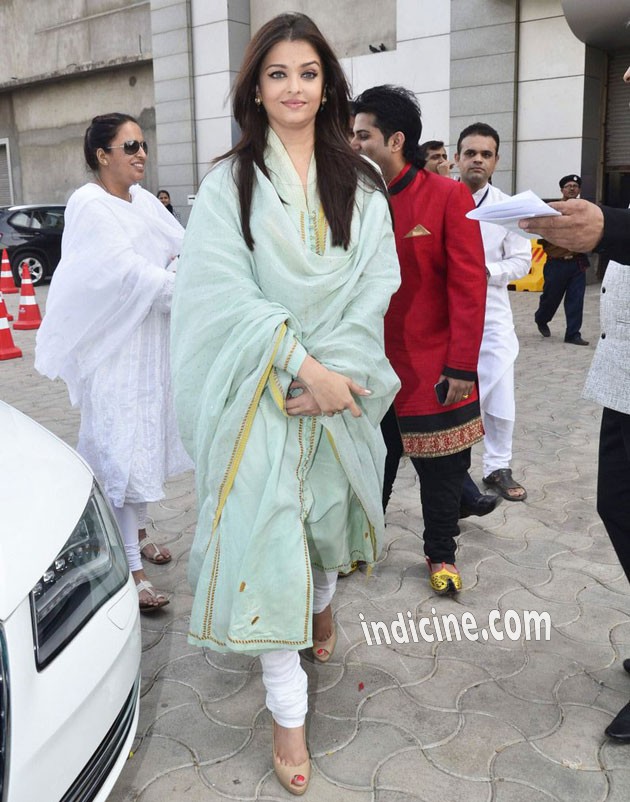 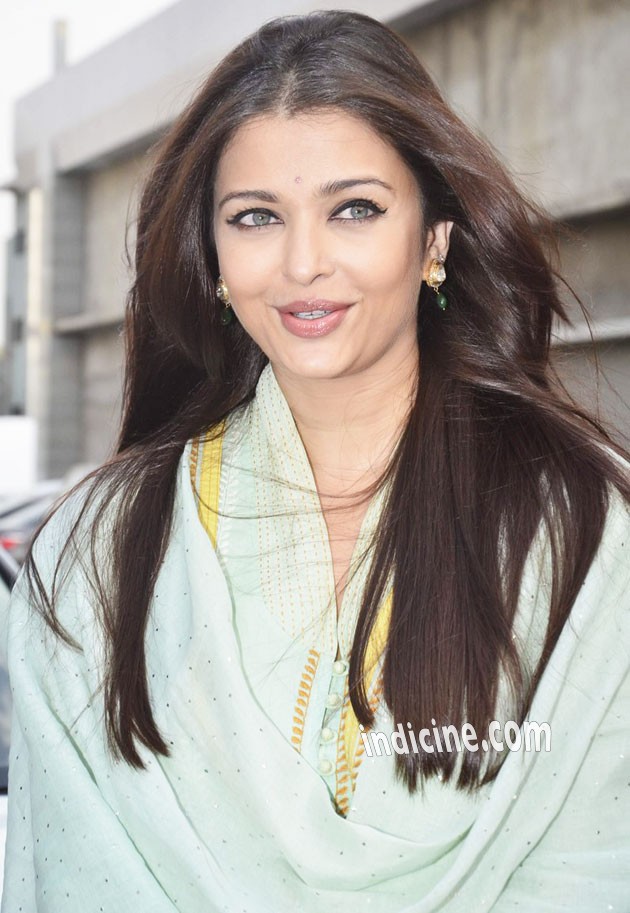 Aishwarya Rai with a kid 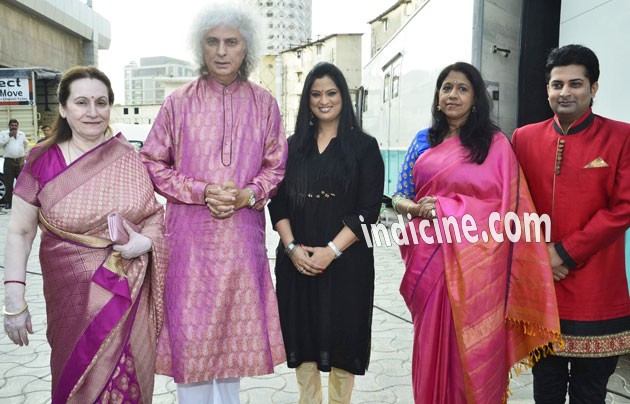 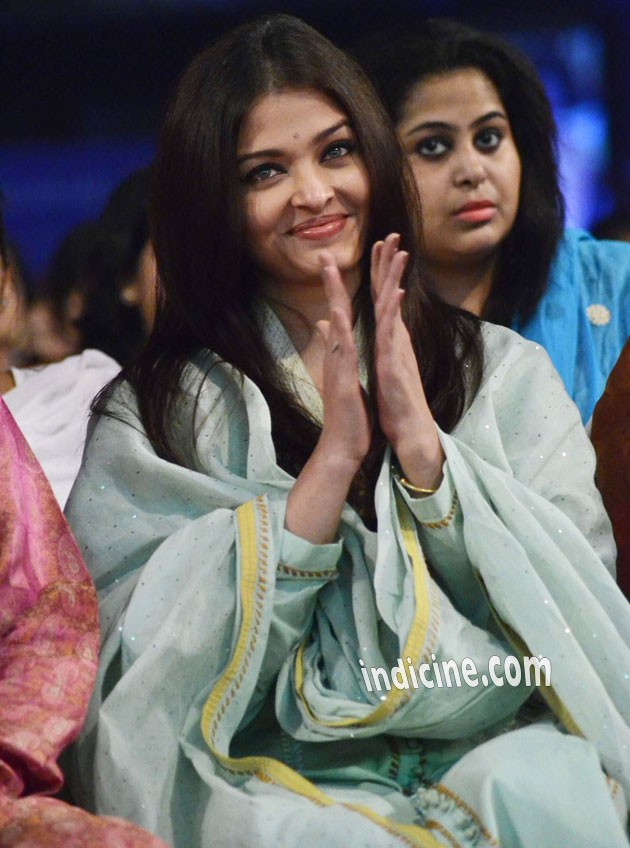 All roads led to the NSCI Stadium at Worli, Mumbai on the evening of 27th April when the elite of Mumbai assembled to pay tribute to Baba," the Legend of pure Love".

Carrying forth the message of the Master of Love and Peace, the Sri Sathya Sai Seva Organisation Maharashtra & Goa organised an evening of brilliant devotional music to offer gratitude to Baba during the 3rd anniversary of His Mahasamadhi.

The evening started with some masterly singing by the winners of the state level Bhajan Mahotsav. This Bhajan competition was held for all Balvikas children from various districts of Maharashtra & Goa participated. The 4 finalists sang their hearts out and left the 6000 strong audience spell bound with their melody and Bhava.

Shri Indulal Shah the doyen of the world wide Sri Sathya Sai Seva Organisation was felicitated by all the senior members of the Central Trust and International Sai Organisation for his untiring contribution to the organization. Several service projects were announced as initiatives in the fields of Educare, Medicare & Sociocare as a formal beginning to the 90th birthday celebrations.

The icing on the cake was the poignant observations by the former beauty queen and the noted thespian Aishwarya Rai Bachhan, when she recounted her feelings and experiences when she performed before Baba at Puttaparthy as a Bal Vikas kid.

The evening was a befitting tribute to the Legend of Pure Love!

It was also a walk down the memory lane for many in the hall.

The much awaited 27th April, 2014 arrived. The massive mega musical festival as a tribute to Bhagavan Baba, as an Aaradhana, was really a great show.

The centrally air-conditioned indoor stadium in Worli was jam packed with over 6000 devotees gathered. The beginning itself was electrifying. Over 100 plus neatly dressed little Bal vikas children occupied the stage in full, waiting for the arrival of an erstwhile Bal vikas student. Yes, Mrs. Aishwarya Bachan arrived on time. The prize winning Bal vikas children rendered their favourite Bhajans, one by one. The close up shots of Mrs. Bachan showed how much she was emotionally involved in listening to their sweet rendering.

Soon of the children were excited when she climbed up the stage. She distributed certificates and other credentials to the winners, and posed for individual snap shots with them. Later she took up the mic, and gave a wonderful talk about her connections with Bhagavan Baba.

At the outset, she thanked her loving parents, for their efforts in taking her in the path of devotion to Bhagavan Baba. Her association with the Bala Vikas for over 7 years, had inculcated the nice values in her life. She mentioned about her few encounters with Bhagavan Baba at the early life to play a few dramas in Divine Presence, including the mega event of COSMOS, a mega ballet programme by thousands of Bala Vikas children in the Hill view Stadium in Puttaparthi. And she recalled those of happy chances of garlanding Bhagavan both in Dharmakshethra, and Prashanthi Nilayam.

She narrated a very emotional event. It was Swami’s Divine visit to Mumbai, and a Drama was to be performed by Bal vikas children in Dharmaksethra, in which she was also acing. But due to some unknown reasons, in the last minute the Drama was cancelled. The children waiting behind the curtains were totally upset, felt sad. She mentally argued with Bhagavan, “Why Swami, why???”

Soon after that, she was Prashanthi Nilayam and she was to offer a garland to Bhagavan. Holding the garland in trembling hands, as she was nearing Bhagavan, she felt nervous. Swami looked at her and smiled with all compassion and Love. She said, she broke down with tears falling rolling down.

She now realizes, that she would have denied of performing in front of Bhagavan, but now she feels happy to note that her career had turned to acting; acting in big ways.

Further reports on the Music event will be posted very soon.

With Love and regards., Mumbai Srinivasan 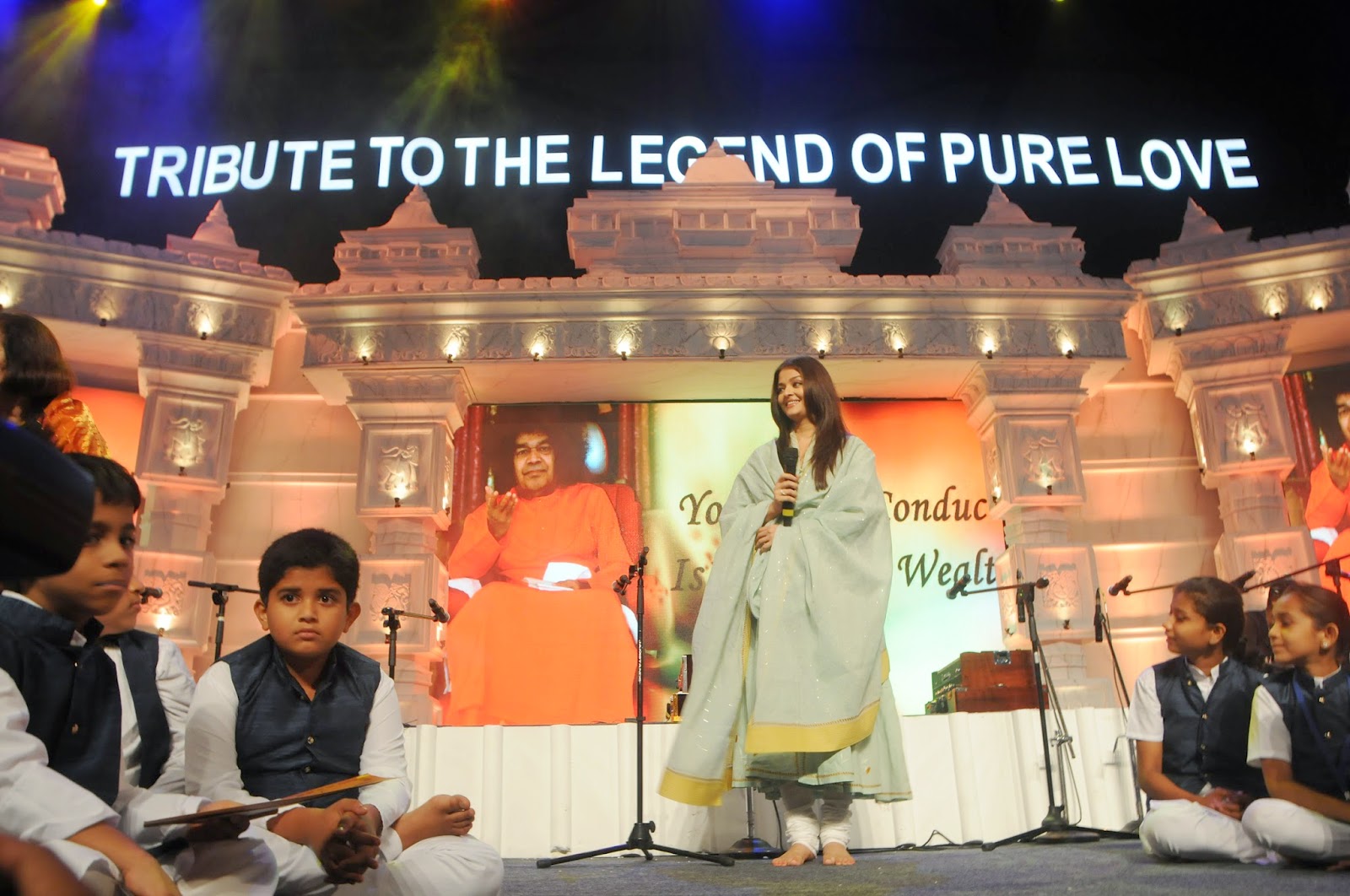 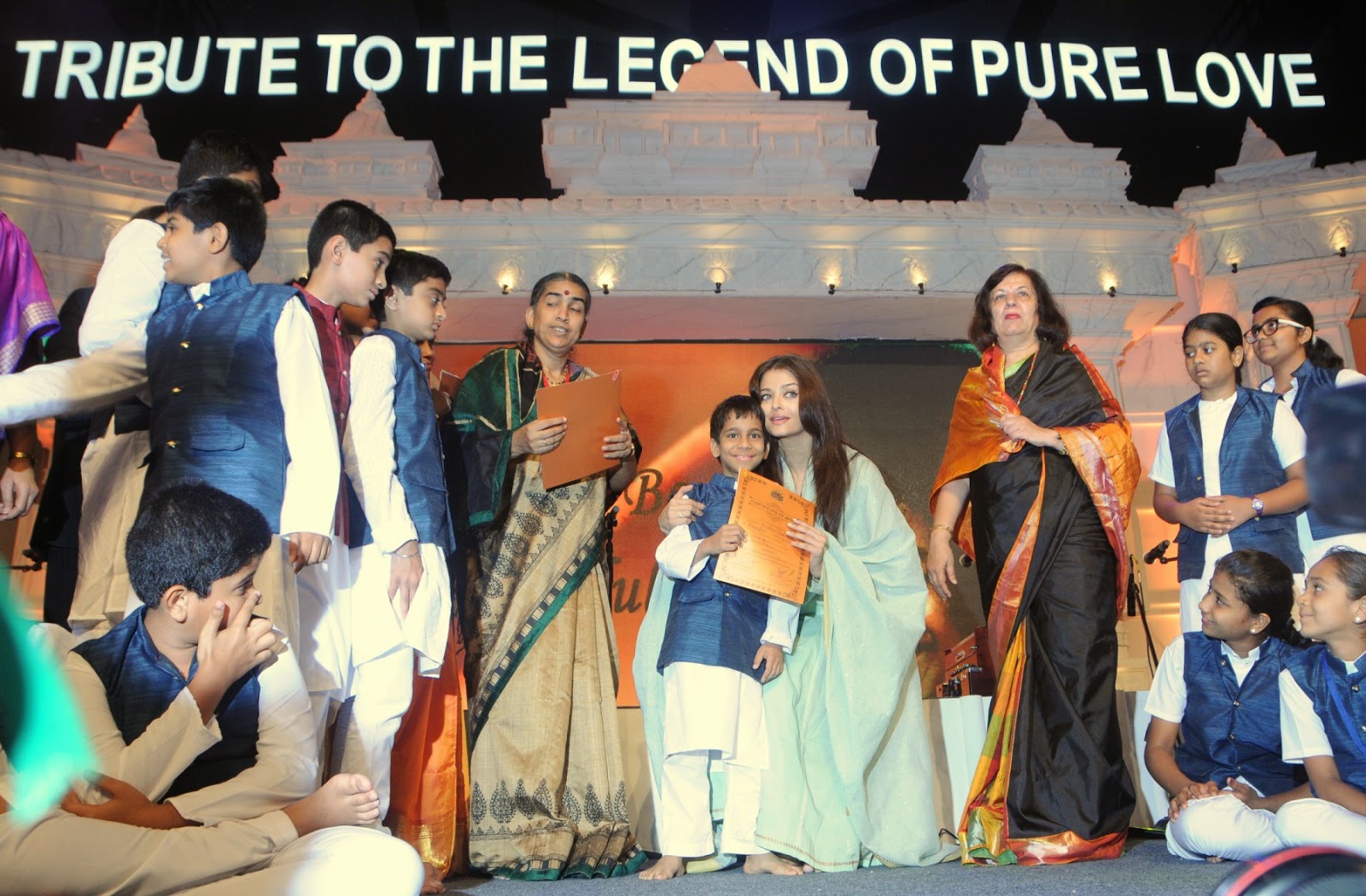 Aishwarya Rai Bachchan, an ex-student of the Sathya Sai Bal Vikas program, was the Guest of Honour & felicitated the Bal Vikas Children who sang melodious Bhajans.

True to the sanctity of the occasion, some of the most renowned Maestros of India will offer a musical tribute, entitled ‘The Legend of Pure Love’ to their Master.

Mr. Alok Saxena Vice President - Mumbai, Sri Sathya Sai Organisations India,  and The All India Vice President Sri Sathya Sai Organizations India, Shri Nimish Pandya, said that this event will showcase to the world the message, teachings and work of Divine Master who touched the lives of millions and millions around the world and continues to do so till today. 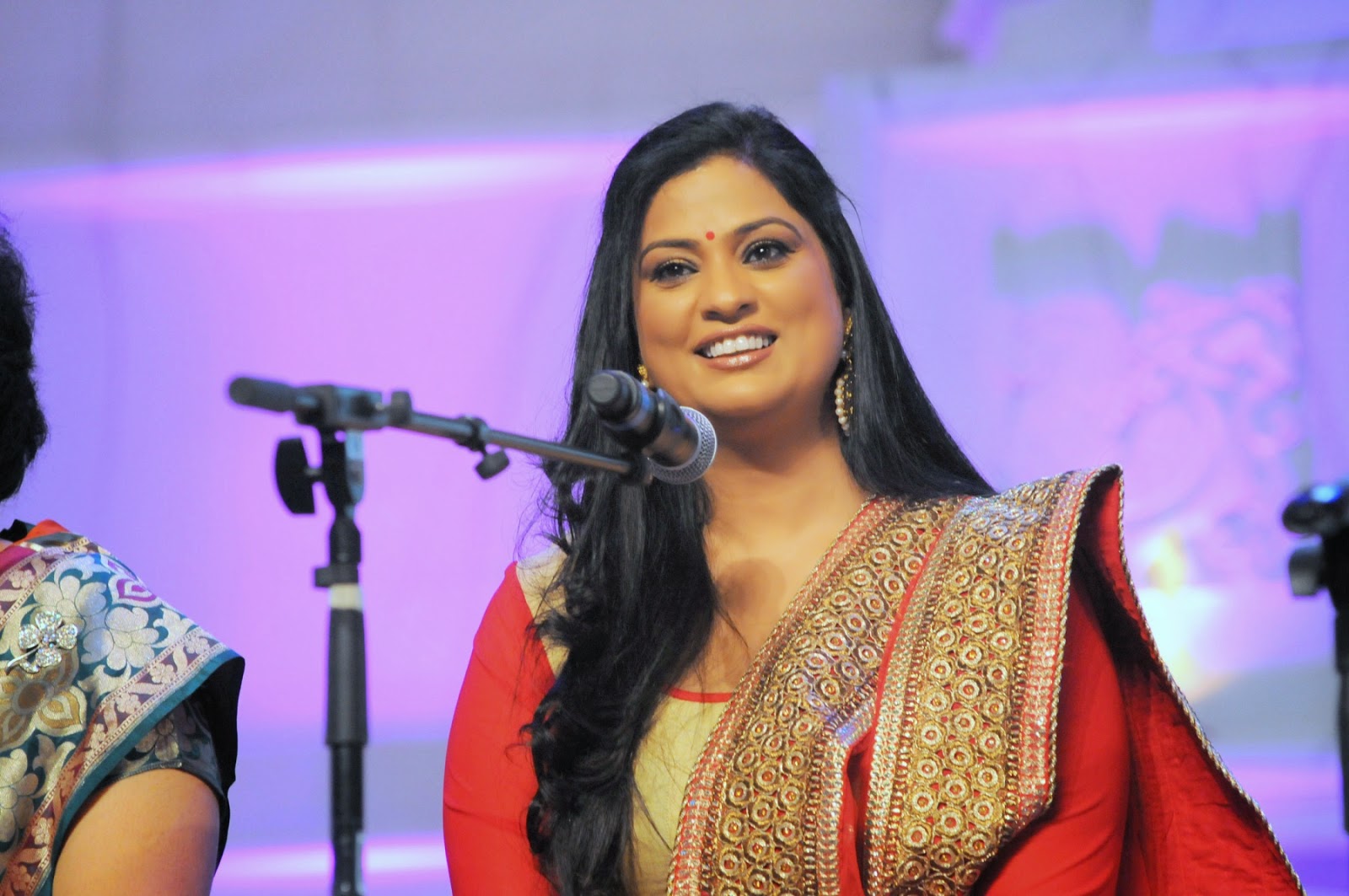 Sri Richa Sharma on the mike 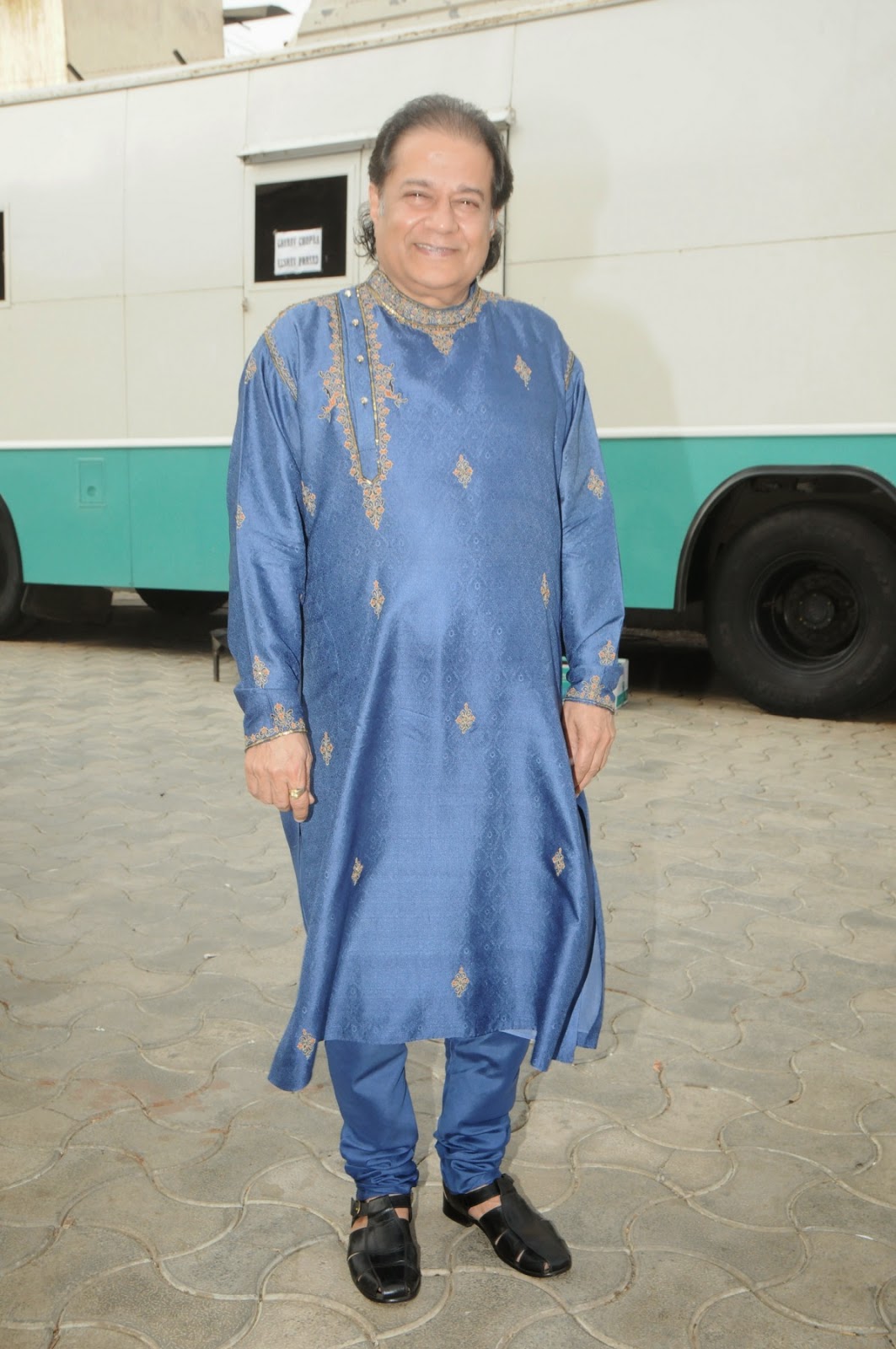 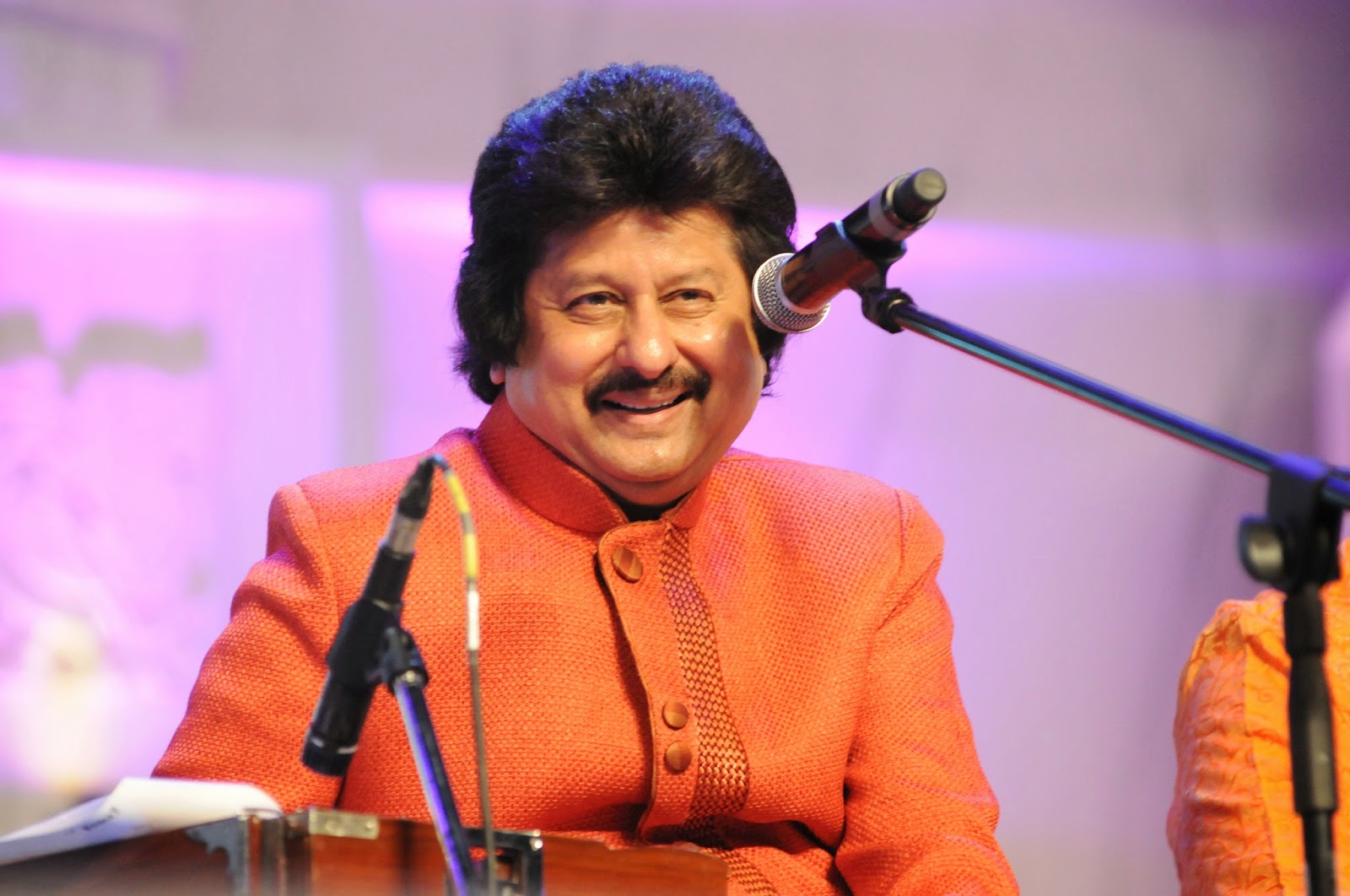 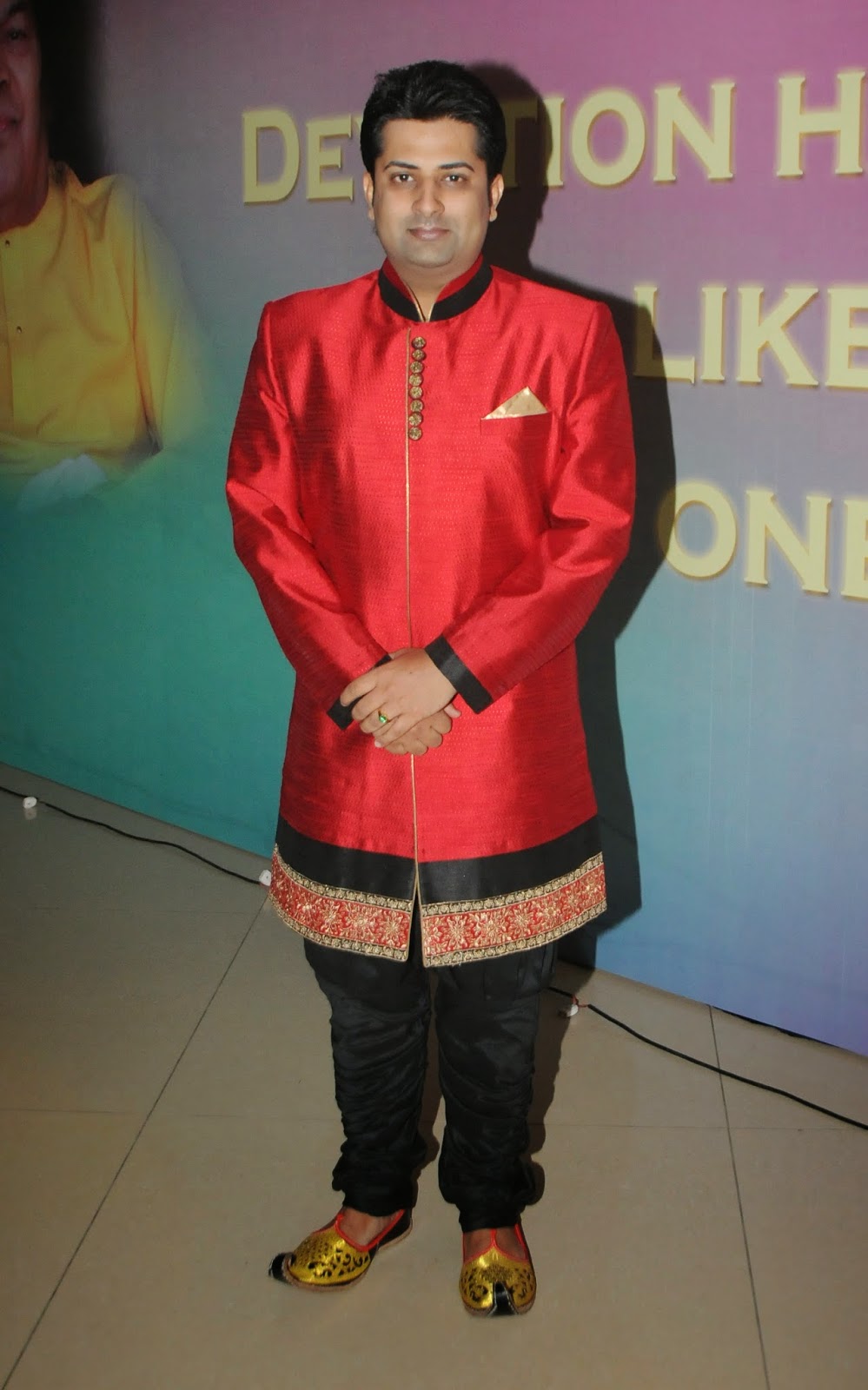 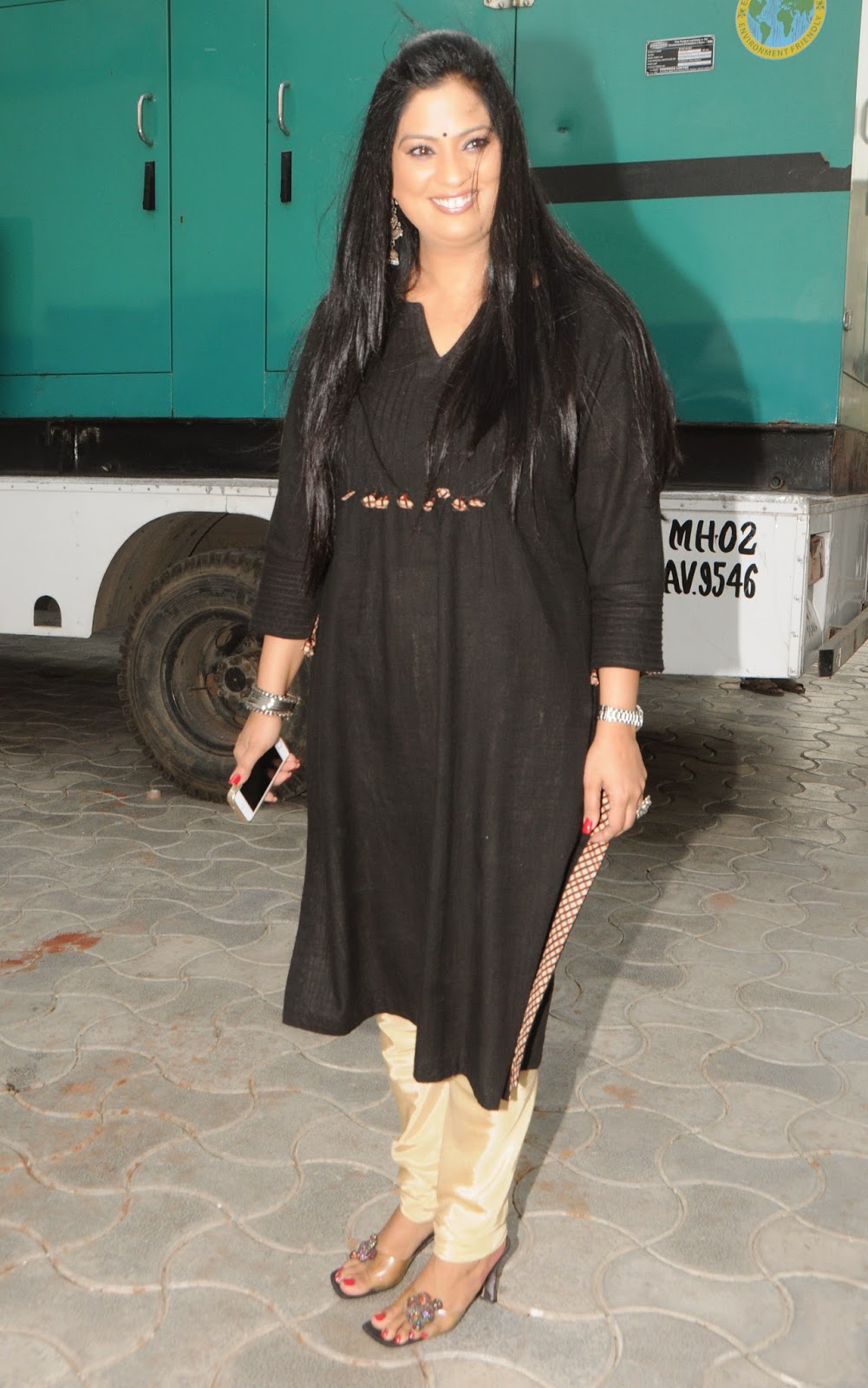 “Bhagawan Sri Sathya Sai Baba is revered the world over by believers and non-believers alike. His devotees regard Him as the Avatar of the Age- their Divine Master who has shown them the Path of Love manifested as selfless service which subscribes to the unique philosophy that both the ‘serving’ and the 'served' are embodiments of the same Divinity, by whatever name called” said Sri Pandya.

Sri Sathya Sai Baba has spent His entire life in an unparalleled continuous endeavor to elevate man to the highest degrees of human excellence. His Universal message of human values and His  astonishing  models  of  EDUcare,  MEDIcare  and  SOCIOcare  inspire  faith  by  proving  the
action ability’ of Divine Love.  These models have stunned the most advanced economies of the world with the sheer magnitude of their work and magnificence of their philosophy.

Educare offers the most advanced education complete with contemporary academics, world renowned faculty and state-of-the-art facilities to students from all religious and economic backgrounds. The system is designed to not only elevate the students’ intellects but also to offer a deep spiritual anchor that equips them with resolute self confidence and character such that knowledge  is  used  only  for  the  benefit  of  mankind  at  large.  All  education,  from kindergarten to postgraduate studies is absolutely free of cost to students, each of whom is admitted solely on the basis of merit.

The Sri Sathya Sai Medicare Projects embody a harmonious blend of the ‘Philosophy of Healing’ with the ‘Science of Love.’ Here every doctor though distinguished in his field and equipped with state-of-the-art healthcare facilities second to none in the world, regards every patient, as an embodiment of the Divine. This is why all treatment including advanced cardiac and neurological surgeries are done completely free of cost for one and all.

In the Sri Sathya Sai Sociocare, Baba has initiated and implemented multimillion dollar Drinking Water Schemes with no government aid whatsoever, alleviating the sufferings of millions of rural Indians. He has taught people all over the world that service is not an act of philanthropy but it is a means to connect with the Divine Life Force which exists within every speck of creation. It is as much an aid for the ‘benefactor as much it is for the ‘beneficiary’

Together, Baba’s work and message signify the resoluteness of positive endeavor based on the strength of character and right action to usher the world into a new era of peace and joy. No other spiritual leader ever has had such a wide reaching, global influence which has not only shattered all barriers of religion, caste, economic status, race and nationality but also continues to inspire millions even three years after His having left His Physical Frame.